the beliefs, actions, practices, policies, and movements that are developed and/or adopted to oppose and eradicate racism.

We created this resource as a way to learn more about anti-racism and to help support wonderful organizations actively engaged in the eradication of racism in our country.

Below is a list of some introductory resources, including ways to support the anti-racism movement, educate yourself and others, and more.

If you have the means, donating money is a phenomenal way to support organizations leading efforts to fight racism and advance equity.

The NAACP Legal Defense and Educational Fund, Inc. is America’s premier legal organization fighting for racial justice. Through litigation, advocacy, and public education, LDF seeks structural changes to expand democracy, eliminate disparities, and achieve racial justice in a society that fulfills the promise of equality for all Americans. LDF also defends the gains and protections won over the past 70 years of civil rights struggle and works to improve the quality and diversity of judicial and executive appointments.

The Bail Project, Inc. is a non-profit organization designed to combat mass incarceration by disrupting the money bail system ‒ one person at a time.

The ACLU dares to create a more perfect union — beyond one person, party, or side. Our mission is to realize this promise of the United States Constitution for all and expand the reach of its guarantees.

#BlackLivesMatter was founded in 2013 in response to the acquittal of Trayvon Martin’s murderer. Black Lives Matter Global Network Foundation is a global organization in the US, UK, and Canada, whose mission is to eradicate white supremacy and build local power to intervene in violence inflicted on Black communities by the state and vigilantes. By combating and countering acts of violence, creating space for Black imagination and innovation, and centering Black joy, we are winning immediate improvements in our lives.

Loveland Foundation is committed to showing up for communities of color in unique and powerful ways, with a particular focus on Black women and girls. Our resources and initiatives are collaborative and they prioritize opportunity, access, validation, and healing. We are becoming the ones we’ve been waiting for.

Unsure of how to support the anti-racism movement?

Check out these sources of further education:

How To Talk About Race

Talking about race, although hard, is necessary. The National Museum of African American History and Culture provides tools and guidance to empower your journey and inspire conversation.

History of Slavery in America

The 1619 Project is an ongoing project developed by The New York Times Magazine in 2019 with the goal of re-examining the legacy of slavery in the United States. It was released in 2019 to commemorate the 400th anniversary of the arrival of the first Africans in Virginia.

In this great time of need, we know it can sometimes feel hard to know where to start.

Here are a few titles we recommend: 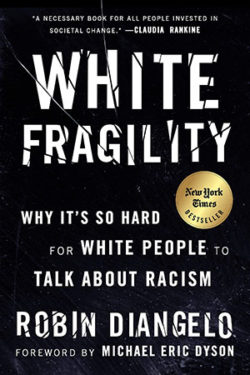 White people in North America live in a social environment that protects and insulates them from race-based stress. This insulated environment of racial protection builds white expectations for racial comfort while at the same time lowering the ability to tolerate racial stress. Although white racial insulation is somewhat mediated by social class (with poor and working class urban whites being generally less racially insulated than suburban or rural whites), the larger social environment insulates and protects whites as a group through institutions, cultural representations, media, school textbooks, movies, advertising, and dominant discourses. Racial stress results from an interruption to what is racially familiar. In turn, whites are often at a loss for how to respond in constructive ways., as we have not had to build the cognitive or affective skills or develop the stamina that that would allow for constructive engagement across racial divides. leading to what I refer to as White Fragility. White Fragility is a state in which even a minimum amount of racial stress becomes intolerable, triggering a range of defensive moves. These moves include the outward display of emotions such as anger, fear, and guilt, and behaviors such as argumentation, silence, and leaving the stress-inducing situation. These behaviors, in turn, function to reinstate white racial equilibrium. This book explicates the dynamics of White Fragility and how we might build our capacity in the on-going work towards racial justice. 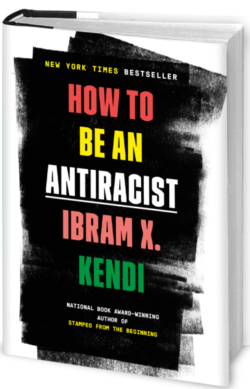 How to Be An Antiracist

Ibram X. Kendi’s concept of antiracism reenergizes and reshapes the conversation about racial justice in America–but even more fundamentally, points us toward liberating new ways of thinking about ourselves and each other. Instead of working with the policies and system we have in place, Kendi asks us to think about what an antiracist society might look like, and how we can play an active role in building it. \r\n\r\nIn his memoir, Kendi weaves together an electrifying combination of ethics, history, law, and science–including the story of his own awakening to antiracism–bringing it all together in a cogent, accessible form. He begins by helping us rethink our most deeply held, if implicit, beliefs and our most intimate personal relationships (including beliefs about race and IQ and interracial social relations) and reexamines the policies and larger social arrangements we support. How to Be an Antiracist promises to become an essential book for anyone who wants to go beyond an awareness of racism to the next step of contributing to the formation of a truly just and equitable society.

In his memoir, Kendi weaves together an electrifying combination of ethics, history, law, and science–including the story of his own awakening to antiracism–bringing it all together in a cogent, accessible form. He begins by helping us rethink our most deeply held, if implicit, beliefs and our most intimate personal relationships (including beliefs about race and IQ and interracial social relations) and reexamines the policies and larger social arrangements we support. How to Be an Antiracist promises to become an essential book for anyone who wants to go beyond an awareness of racism to the next step of contributing to the formation of a truly just and equitable society. 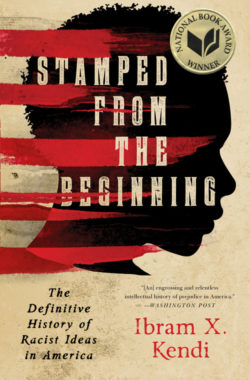 Stamped From The Beginning

Some Americans cling desperately to the myth that we are living in a post-racial society, that the election of the first Black president spelled the doom of racism. In fact, racist thought is alive and well in America – more sophisticated and more insidious than ever. And as award-winning historian Ibram X. Kendi argues in Stamped from the Beginning, if we have any hope of grappling with this stark reality, we must first understand how racist ideas were developed, disseminated, and enshrined in American society.

In this deeply researched and fast-moving narrative, Kendi chronicles the entire story of anti-Black racist ideas and their staggering power over the course of American history. Stamped from the Beginning uses the life stories of five major American intellectuals to offer a window into the contentious debates between assimilationists and segregationists and between racists and antiracists. From Puritan minister Cotton Mather to Thomas Jefferson, from fiery abolitionist William Lloyd Garrison to brilliant scholar W.E.B. Du Bois to legendary anti-prison activist Angela Davis, Kendi shows how and why some of our leading proslavery and pro-civil rights thinkers have challenged or helped cement racist ideas in America.

Contrary to popular conceptions, racist ideas did not arise from ignorance or hatred. Instead, they were devised and honed by some of the most brilliant minds of each era. These intellectuals used their brilliance to justify and rationalize deeply entrenched discriminatory policies and the nation’s racial disparities in everything from wealth to health. And while racist ideas are easily produced and easily consumed, they can also be discredited. In shedding much-needed light on the murky history of racist ideas, Stamped from the Beginning offers us the tools we need to expose them—and in the process, gives us reason to hope. 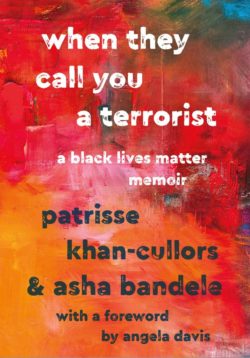 When They Call You a Terrorist

Patrisse Cullors’ first book cowritten by Ashe Bandele, is a poetic memoir and reflection on humanity. A New York Times Best Seller – necessary and timely, Patrisse’s story asks us to remember that protest in the interest of the most vulnerable comes from love. Leaders of the Black Lives Matter movement have been called terrorists, a threat to America. But in truth, they are loving women whose life experiences have led them to seek justice for those victimized by the powerful. In this meaningful, empowering account of survival, strength, and resilience, Patrisse Cullors and Asha Bandele seek to change the culture that declares innocent black life expendable. 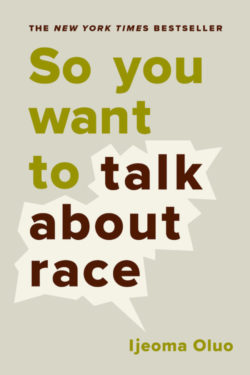 So You Want to Talk About Race?

In this New York Times bestseller, Ijeoma Oluo offers a hard-hitting but user-friendly examination of race in America.

Widespread reporting on aspects of white supremacy–from police brutality to the mass incarceration of Black Americans–has put a media spotlight on racism in our society. Still, it is a difficult subject to talk about. How do you tell your roommate her jokes are racist? Why did your sister-in-law take umbrage when you asked to touch her hair–and how do you make it right? How do you explain white privilege to your white, privileged friend?

In So You Want to Talk About Race, Ijeoma Oluo guides readers of all races through subjects ranging from intersectionality and affirmative action to “model minorities” in an attempt to make the seemingly impossible possible: honest conversations about race and racism, and how they infect almost every aspect of American life. 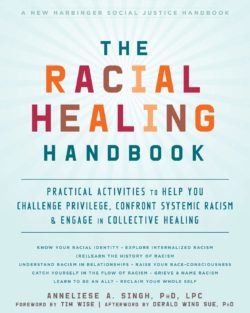 by Anneliese A. Singh

Healing from racism is a journey that often involves reliving trauma and experiencing feelings of shame, guilt, and anxiety. This journey can be a bumpy ride, and before we begin healing, we need to gain an understanding of the role history plays in racial/ethnic myths and stereotypes. In so many ways, to heal from racism, you must re-educate yourself and unlearn the processes of racism. This book can help guide you.

The Racial Healing Handbook offers practical tools to help you navigate daily and past experiences of racism, challenge internalized negative messages and privileges, and handle feelings of stress and shame. You’ll also learn to develop a profound racial consciousness and conscientiousness, and heal from grief and trauma. Most importantly, you’ll discover the building blocks to creating a community of healing in a world still filled with racial microaggressions and discrimination.

This book is not just about ending racial harm—it is about racial liberation. This journey is one that we must take together. It promises the possibility of moving through this pain and grief to experience the hope, resilience, and freedom that helps you not only self-actualize, but also makes the world a better place.